Guitarists and bassists! If you click „read more”, your world will never be the same – in fact, it will collapse. Think about it now, or…

One thing – I’m a bass player, and the guitar is still a mystery for me. And I paid more attention to meters and levels than to playing… In all samples it’s not about what and how I play, or even how it sounds, there is only the signal level what matters. Ready? Let’s go!

Let’s start with something stupid – an instrument connected directly to the line input of the interface. Of course, I know it does not make sense, but let’s do it to have a reference point. So the first example is a passive bass (description later) directly connected to Digidesign 96io interface with operating level -10dBV, interface is calibrated to -14dBFS, the input impedance is 10kΩ.

Level is weak as you can see, and it sounds even worse – without the bottom and all:

It is not about the sound, while it’s worth a listen and remember not to do so. It is about the output level of  passive line-loaded instrument. It is very low.

In order to reduce the number of screenshots, let’s use something with more juice, with humbucking pickups. OK – Epiphone plugged directly into the interface:

It sounds weak as well, so I save space on my soundcloud. Strato and Gibson Lucille sound thin and miserable as well. Waste of time.

As you can see, the passive instrument loaded with line impedance cannot harm the interface, even with the  -10dBV operating level. It’s obvious that no one will record the guitar that way (although who knows?), those screenshots and samples are there for future reference. You can expect much higher levels when the instrument is connected to the high impedance input – especially with pickups with high internal impedance, like the Lucille and Epi.

Let’s start with what I can – my old (of legal age) and faithful Squier Precision Bass, SQ series, passive of course. Strings gauge 40, only the precision pickup, by the way it’s still the stock squier pickup, both knobs full open. The bass is connected parallel to the inputs of the Boss compressor and the buffer, which is Focusrite Platinum Penta. Boss CS-2, of course, works as a buffer in bypass mode. Guitar is loaded with two inputs in parallel, but this is not a problem, because the load impedance is still high enough. However, theoretically the output level of the guitar may be lower in this test than during normal operation, when the instrument is connected to the compressor input only – then the load impedance is 1MΩ. Let me remind you that the output of the Boss CS-2 is connected directly to the interface input, with the input impedance 10kΩ. Is that enough and will it have an impact? We will see later, for now it is what it is.
So – what level an unloaded passive precision bass can produce? Here you go: top – Focusrite buffer, bottom – Boss buffer:

Aaaaaaaaaaaaaaagrh!!! No way! And this is me playing something like that for over twenty-five years? Such clipping? Such a drop in the level? No way! Certainly it’s the battery! So – fresh Duracell!

But if you think of this, the top, blue track has almost perfect level – not too big, not too small, with no distortion…
Although, if I try hard, I can clip the input – nothing musical then, just level, but I can 😉

Okay, battery changed, now it’ll be fine, let’s forget about bass and let’s try Fender Stratocaster Made in Japan. No modifications,  strings D’Addario gauge 10, the bridge pickup, the bridge is Floyd Rose – locked with a piece of wood by the way.  Please do not comment my guitar skills 😉 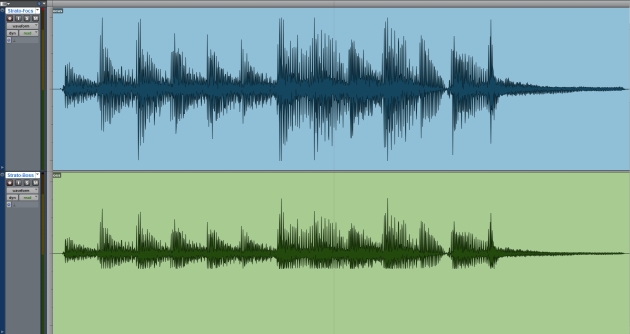 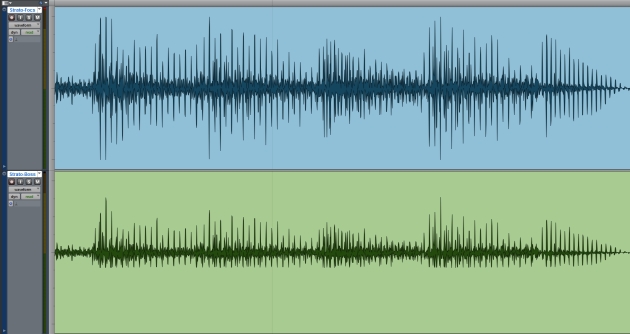 It looks like it was not the battery… So it’s just the way it is – the top half of the waveform looks quite nice, but the bottom – horror… At the same time the level is much lower … Class A, well, non-symetrical clipping, OK, but to such an extent? Maybe the Boss is loaded too heavily? We’ll check later, how the Boss connected to the high impedance input works – for now let’s not change anything and stick to the well-known idea that the Boss connected to the line input works fine as a buffer. On the other hand, when you are only listening, without looking at the waveforms, and after matching levels, or even through an amplifier… Well, maybe it will work in the mix…

By the way, you can see that nothing can be seen, this is how SoundCloud is showing waveforms – slapdash 😉 To see and hear properly, I suggest you download the files and play them in your favourite DAW – these are small mono 44/16 wavs, exported directly from Pro-tools.

Okay, the Boss buffer aside, but let’s look again at last screenshot. The first „blue” track is recorded with the buffer with unity gain, only to get the proper input impedance. I feel I have to remind it:

We can see clipped peaks clearly! What does it mean? It means, that the standard guitar with single-coil pickup can produce a signal level that can easily clip interface input with the -10dBV operating level! What’s more – the 96io is calibrated to 2dB more headroom than the standard -12dBFS! Let me remind you that the interface begins to clip at the peak level at around 2.5 V – so the strato can produce voltage of 2.5 V and more! OK, it is the peak voltage, but still it’s impressive. If not weak current, it would lit a small light bulb 😉 Is it really what we called „instrumental level” or „guitar level”? And I’m not a guitarist, an average guitar player can play even louder, while still sounding better. Well, and it was a single coil pickup – what about humbuckings? We’ll see soon 😉 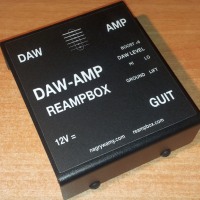